Welcome to another post! I was thinking of my last post this morning, which led me to think about the other forms of art I’ve made. I wanted to share something I wrote on my About Me page, which is one of my new hobbies: painting. Starting last summer, I tried painting on canvases, hoping to fill my time with something interesting. My first painting was a success, although I have improved greatly from that point. Below, I will show each one and go into a little bit of detail on it. 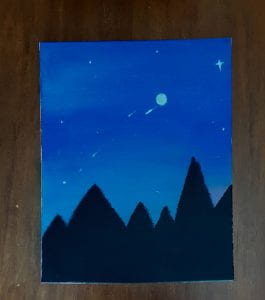 This is the first canvas painting I ever did, which was in May of last year. It is supposed to show a late evening sky with trees in the front. The style of trees has changed for me, as you will see later on. The paint also stops at the edge of the canvas instead of going all the way around the sides of it, which is not very visible in this photo. I think I have improved upon this painting very much. 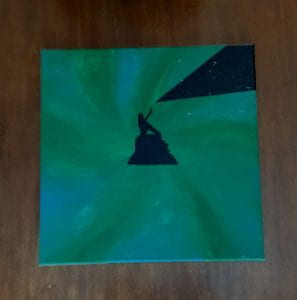 The second painting I made was around September or October of last year. It was inspired by a painting by Serena Art, which I watched on YouTube one day. This one is my favorite because it feels more creative and artistic to me. In order to create the girl that points upward, I drew a stencil in thick paper and cut it out, then traced over that with a pencil onto the canvas. I filled it in with black paint and made a small patch of sky to go with it, and voilà! 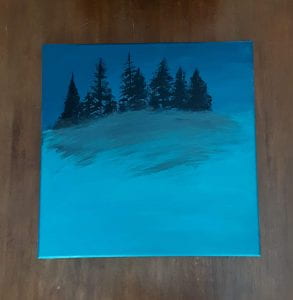 This one was an interesting attempt at a Bob Ross tutorial of a cabin. It was meant to be a gift to my mom for Christmas, but I messed up halfway through and decided to give her the next painting instead. I made the ground of the original tutorial look too blue, so I decided to make it an icy lake instead. I’d never tried painting water before, so I smeared some grey on the canvas and called it a reflection. I’d say it’s alright for a first try at making water. 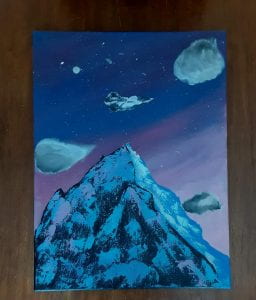 My family and I decided to call this Cotton Candy Mountain for a reason. As my most recent and most chaotic creation, it hangs in our pantry proudly. It was inspired by another YouTube video by Grace J Art. I went a bit overboard with the snow on the mountain, but we still love this painting dearly at my house.

If you think painting sounds like a fun thing to do, I strongly suggest trying it. It’s been really cool to see what I end up creating, especially when I have a guide and veer from the instructions. I hope to show you more of these as I improve my skills later on!

*All photos in this post were taken by me 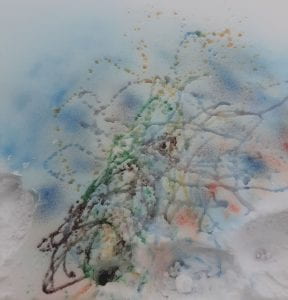 This morning, I had planned to make a snowman, which is one of my favorite snow day activities. I went outside later, ready to build one, only to find that the temperature was too low for the snow to stick together and form snowballs. To combat this problem, I decided to try something new and make “snow art”.

I gathered containers of water and dropped food coloring into each one. I took them outside, creating my abstract masterpiece by spraying and pouring the water over the snow. I ran into some issues with the size of my bottles and food coloring that was not strong enough to see in the snow. As a solution, I exchanged spray bottles back and forth between my house and outside. I let my dad fill the bottles up, then I took them back outside to spray so I would not get snow inside the house. When the food coloring in my bottles was not adequate enough to see, I simply asked my dad to put more color in them.

Therefore, when the problem of powdery snow arose, I decided to try snow art. When my bottles of water ran into challenges, I asked my dad to help me and solved my second issue. I was glad to get outside and try something different today!

*The image in this post was taken by me